Throughout this article the term salt refers to table salt, i.e. sodium chloride, though much of what follows can be generalized to other salts that dissolve in water.

You probably won't find a chunk of salt sitting around outside in your back yard, because rain would quickly dissolve it away. However, there are salt mines deep underground where salt exists in rock form. The Sifto Salt Mine beneath Goderich, Ontario, Canada, is one of the largest, extending for several square kilometers. Not far away, another operational salt mine exists 340 meters beneath Detroit Michigan. It too extends for several square kilometers. There are many other salt mines throughout the world, and some have been operational for thousands of years. Solnitsata, Bulgaria ran a salt production facility 6,000 years ago.

Until the advent of modern machinery, extraction of salt was labor intensive and terribly dangerous, often performed by slaves or prisoners. Salt dust entered the mouth, nose, and lungs, and dehydrated the mucus membranes, leading to respiratory problems and opportunistic infections. Sodium also worked its way into the alimentary canal, and then into the blood, where it unbalanced the system. Thus salt was difficult to mine, and expensive. Only the rich had salt on the table as a casual condiment. So valuable was this commodity that early Romans established a connection between the words salt and salary; though the idea of paying roman soldiers directly with salt is rather unlikely. Many other phrases persist, such as "salt of the Earth", and "He's not worth his salt."

A sodium atom has 2 electrons in its first shell, 8 in its second, and 1 in its third. A single electron in the outermost shell is unstable, and highly energetic. If given half a chance, sodium will pass that electron to any other atom that stands ready to receive, such as oxygen. In other words, sodium, as a pure metal, is highly flammable. Sodium powder, left out in the air, will spontaneously combust, producing sodium oxide. No need for a spark or a flame to ignite the metal; room temperature is sufficient. As you might expect, pure sodium is never found in nature. If you happen to run across some sodium, you can be sure it has already combined with some other element.

Moving to the other component of salt, a chlorine atom has 7 electrons in its outermost shell, and is just one electron shy of a complete shell with 8 electrons. Considerable energy is released when chlorine receives an electron to become a chloride ion. Put sodium and chlorine together and find a perfect match. (Stand back though, because there's going to be a lot of heat.) The sodium atom donates its electron, leaving a complete shell behind, and the chlorine atom receives that electron, building a complete shell. Both atoms are now in a low energy state, and everybody's happy. 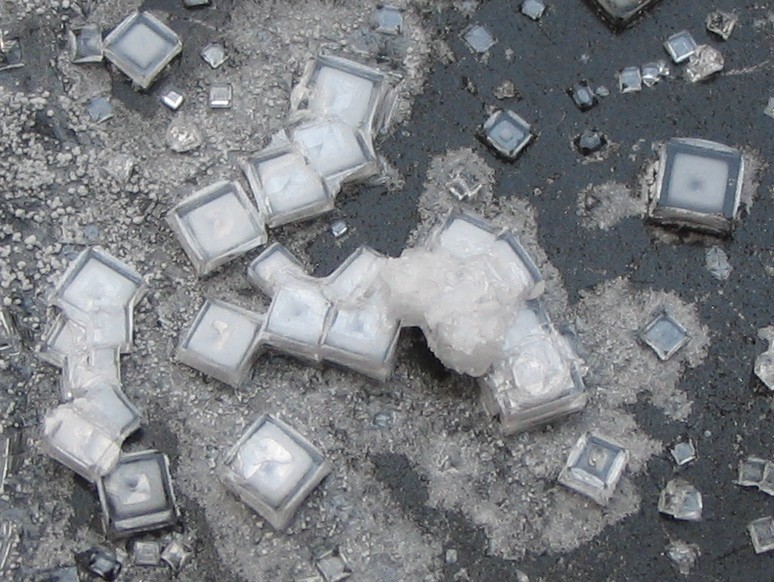 Rock salt melts at 801 degrees C, thanks to the strong bonds between adjacent ions. This is considerably higher than the melting point of glass. I use to melt bottles in my fire pot, a form of abstract art if you will, but I would have had no luck melting a can of salt - a backyard fire doesn't get that hot.

A raging house fire is barely sufficient to melt salt, yet those ions easily slip apart in the presence of water. In other words, salt dissolves in water. Each ion surrounds itself with a cluster of water molecules, 8 water molecules around sodium and 6 around chlorine. The resulting aggregate has a charge of +1 or -1 according to the central ion. If a dozen sodium ions happen to gather together in a small area, they will push each other apart, because positive charges repel each other. The same thing happens to chloride ions that drift too close together. Thus salt water is a uniform mixture of water, sodium, and chloride.

Fresh water is, by definition, free of salt. It is essentially H2O and nothing more. But salt is plentiful on the earth, and most of the water on our planet is salty, of varying concentrations. The obvious example is the ocean, at 3.5% salinity. What does this mean? Take 100 grams of sea water and let all the water evaporate away; you are left with 3.5 grams of salts. Most of the salt is NaCl, but other compounds are present as well.

Is it a coincidence that blood has the same salinity across fish, amphibians, reptiles, birds, and mammals? Probably not, but the explanation is unclear. Many believe that vertebrates evolved in an ocean that was less saline, perhaps 0.9%, and their blood acquired the composition of sea water at that time. Over the next 600 million years, rain continued to wash minerals down from the continents and into the sea, and animals had to adapt. Many moved onto dry land and became the terrestrial forms we know today. Some moved into lakes and rivers, looking for fresh water, while some remained in the sea and adapted to the increasing salinity. As a special case, some of the land mammals, e.g. whales and dolphins, returned to the sea, and had to "learn", like their distant fish cousins, how to survive in salt water. So perhaps the blood of all these different animals reflects a common aquatic ancestor who lived in a less salty sea. This theory raises a couple of questions however.

How then does a marine mammal, or a salt water fish, drink from the sea? Their blood is like ours, with a salinity far less than the sea, so they must extract most of the salt as they drink. Well some marine vertebrates don't drink very much. They don't pant or sweat, so they don't lose water as quickly as we do. Some sea animals acquire sufficient fresh water from other foods, like a sea lion eating a salmon, or they retain the water that naturally occurs as part of respiration, i.e. the water that you and I expel as we breathe out. Some mammals at high latitudes eat snow to obtain fresh water. Other mammals, such as the seal, do indeed drink salt water from time to time, but they have extremely efficient kidneys, capable of pumping salt out of the blood and into the urine. In fact their urine is 2.5 times as salty as the sea. Salt water fish have evolved the same excretory capabilities. This reminds me of an air conditioner running on a hot summer day. Heat is pumped out of the house and into the coils in the back yard, which necessarily run hotter than the ambient temperature. Of course this takes energy, as you discover when you receive your electric bill at the end of the month. In the same way, it takes energy, metabolic energy, to pump salt out of an animal's body and back into the environment. so a sea vertebrate will obtain fresh water when it can, and drink salt water when it must. This thermodynamic reality lends credence to the "optimal salinity hypothesis".

Animals from shrimp to whales live comfortably in the ocean, but there are even saltier places on earth. Consider the Great Salt Lake in Utah. This is a remnant of Lake Bonneville, which covered most of western Utah. Most of Lake Bonneville was released through the Red Rock Pass in Idaho 16,800 years ago, Leaving a lake approximately 75 miles long and 28 miles wide. Three rivers carry minerals into this lake, and there is no outlet other than evaporation, thus its mineral content has steadily increased since the fresh water Bonneville lake drained away. Its salinity is currently 27%, nearly 8 times as salty as the ocean. Almost nothing can live in such waters, except for brine shrimp, brine flies, and salt tolerant algae and bacteria. These serve as food for many species of birds that surround the lake. People can and do swim in the Great Salt Lake, but you have to push your way through a wall of flies and shrimp on the beach. Don't splash the salt water in your eyes; it's a painful experience! Fortunately it is easy to float about like a cork. Even an inexperienced swimmer can keep his head above water. Due to the mineral content, the salt water is approximately 10% denser than fresh water. Thus 10% of your body, i.e. your head, remains above the surface of the water at all times. If there are no storms or waves, you should have no trouble keeping the salt out of your eyes, nose, and mouth. You might even return to shore with your hair dry. When finished, wash the salt off your body using one of the outdoor showers. Don't leave these salt crystals on your skin for any length of time.

This is not the saltiest lake in the world. The Dead Sea, between Jordan, Israel, and Palestine, lies 429 meters below sea level, earth's lowest elevation. It is 300 meters deep, with a surface area of 600 square kilometers. This terminal body of water, with no outlets other than evaporation, has a whopping salinity of 34%, on the edge of saturation, and a density of 1.24. Other than a few hardy species of bacteria and algae, nothing can live in these waters, hence the name Dead Sea. Yes, you can swim in the Dead Sea, but it is even more important to protect your eyes and mouth, and even easier to do so, since bobbing about is effortless.

For an even saltier experience, travel to the Don Juan Pond in eastern Antarctica. This is a small lake, just 100 meters by 300 meters. Salinity rolls in at 42%, 12 times as salty as the ocean. Temperatures routinely fall to -30 degrees C, yet the pond does not freeze due to its high salt content. Don't even think about swimming in this pond. It may not be frozen, but your flesh would freeze in less than a minute if immersed in this subzero liquid. Even a hand or a foot would experience frostbite in just a few seconds.

Let's perform an approximate molecular breakdown. Unlike the ocean, the salt in this pond is primarily calcium chloride, CaCl2. Divide 42 by 110, the atomic weight of calcium chloride, and get 0.38. The water fraction is 58/18 = 3.2. Separate the salt into its 3 ions, and there are barely 3 molecules of water for each ion. Even if water is shared between adjacent ions, surrounding each ion with 6 to 8 water molecules is a challenging geometric puzzle. Any additional ions would come in contact with other ions and would crystalize out onto the lake floor. This is saturation; this is as salty as water can get. The Dead Sea has a similar molecular breakdown. It holds a little less salt by weight, but that salt is based on sodium, rather than calcium, which is lighter, thus the ion distribution is about the same, approximately three water molecules for each ion. there's hardly a water molecule that isn't in contact with sodium, calcium, or chlorine.

Other than salt, the saltiest condiment in your kitchen might be Kikkoman soy sauce, which declares its sodium content as 920mg per tablespoon. This is of course a mix of metric and English units, and sodium is only 40% of salt by weight, so we need a little math to turn this into a measure of salinity. I calculate a salinity of 15.4%, halfway between the ocean and the Great Salt Lake. If you have high blood pressure, don't use a lot of soy sauce in your cooking, and/or buy one of the low-salt varieties.